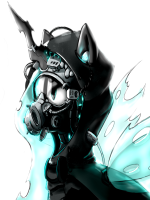 Appearance (Picture or description):
Standing four foot five on digitigrade legs that end in hooves, a bit short compared to other races but average for a Fae. Humanoid in shape but her features are insectoid and equine with a perfect mix of both across the body rather than seeming grafted like the mighty minotaur or the cunning agile satyr, a standard two arms two legs with the addition of a soft tail of bubble-bee or moth like hair. Instead of skin Laara is covered smooth chitin that was definitely not suitable for armor, and unlike her racial cousins called Pex (or others would call them Pixies, same as they'd call her kind Faeries) she did not have crests that adorn her head and rump, and instead of a shell on the back she had moth or bumblebee-like hair in which clear dragonfly-like wings were connected from, which was colored mossy green. Silted but emerald eyes, a slight muzzle and a curving horn sticking out from mossy green locks along with two almost fuzzy looking equine ears.

Laara went for more practicality rather than fashion, wearing a sage green embroiled cloth tunic with some designs that were caramel in color, with muted bluish-green cloth pants.


Spoiler:
Something similar to this but without holely limbs The artist is the lovely Siansaar, by the way.

Personality: Extremely curious and light-hearted individual who's only love is the adventure and exploration on a level never before seen for the fanciers of fantasy thanks to the Nerve Helmet.

Back story (Real world): Nikki, a name fondly known on many fiction sites as she typed her way to smalltime internet celebrity, Nikki absolutely adores exploring ficyion, mostly fantasy in her many stories written over the years, expanding into sci-fi only every once in a while, able to live life as it were for still being in high school, college and various reality interferances drove her over the years to develope a method of letting her imagination flow outward and change the world aroind her for only her eyes to see, leading in greater success for stories. But things changed, her self induced illusions became quite addictive, somtimes she'd lose track of what wws truly really happening, the fantasy became more elaborate and elaborate until reality came crashing down on her, the veil became so thick that she couldn't see the recklessness of a fool on the road.

Damaged and feeling her own mortality, Nikki laid under the attention of doctors for weeks, only uttering a peep when needed, when the time of her release came she went from friendly and warming to reclusive and shy, a shadow of her former self battling with the same fantasy that almost killed her. Nikki would've snapped at some point if it weren't for the moment her parents presented her with Nerve Gear, and specifically the Nerve Helmet, a way to literally plug her senses into the worlds of all kinds. Maybe, she thought, maybe she could focus the wild imagination of hers into the lives she could live with games. So began a long journey within virtual reality, it only made sense that the promise of a fantasy world of limitless possibilities like Milaheim would have caught her eye, if not sooner.
Backstory (Character): The Fae clans have been dwindling and dwindling for years due to instability and infighting, but those that manage to avoid the senseless conflict of the warring clans come to a dark truth, these costly horrendous quiet wars will cause their kind to fade away without a word.
And so those who stay true, the Fae'Aun clan as they call themselves, devote their existance to the roots of their lost brothers and sisters, the art of shamanism. In the warring clans, shaman do exist but in a twisted form, enslaving the elemental spirits to their will, while those of Fae'Aun communicate with the four great spirits, Shas of flame, Por of water, Kor of air, Fio of earth and their children.
Each shaman starts with rigorous meditation practices, a basic ritual preparing, ending with the "Walk of Attunement", a special trial which allows the young Fae'Aun which of the elements resonates strongest within the soul, depending on the element depends on what spirit the student is devoted to till understanding that element.

Laarra's attunement, happens to be to Por, as part of her training she was casted into the wild world of Milaheim to truly understand the element of water, Por's greatest gift to the world, and his fellow spirits as they come to her. Only then can she return to her people and take her place amongst her people.

Prove it that you REALLY read the FULL post (Be creative): I liked the part where it had pictures
Rarity is a cool thing, rarity promises gem sockets and attributes, but RNG is a cruel mistress.

Last edited by Kupu The Shifter on Mon Sep 16 2013, 05:12; edited 6 times in total (Reason for editing : Came up with decent revision ideas and made them happen)

Andrew wrote:Lol the more the merrier I guess.

(0/0)
I have made a little update after considering the direction I want my class to sorta go and a few other things, to do this I crrayed a backstory! Along with that I made one for the human behind the character as well. It's.. I dunno, sorta liked it but sorta not but at the same time best I could come up with for the moment. Oh well! It'll do.