Floor One: Town of Beginnings.

(1450/2100)
When Kid entered the village he saw the mecha-arm guy ran toward him.
"Whoa whoa whoa there, why are you so in hurry?" He grabbed Raven's Nasod Arm which was hot.
"Whoa! Does this thing overheated?"
_________________
Raven Taker's uncle IRL. Please report to me if he behaves badly.
Beginner Pixel Artist
if you want a specific Pixel art for your weapon or your skill, don't hesitate to ask me! 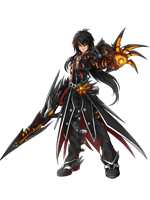 (0/0)
"Stop holding my hand!" Raven pulled his hand back. "I'm going to finish this quest and it's none of your business." Raven continued his walk and left Kid behind.

(1450/2100)
"Wow... alright... But hey," Kid approached Raven and walked beside him, while continuing his word. "The boss fight will start in about 1 hour or so. Can you level up that fast?" Kid opened his menu and invited Raven again to join his party. "Come on, I'll help you."
_________________
Raven Taker's uncle IRL. Please report to me if he behaves badly.
Beginner Pixel Artist
if you want a specific Pixel art for your weapon or your skill, don't hesitate to ask me!

(0/0)
"Sigh, if this means you will stop bothering me, fine." Raven pressed accept button and walked beside Kid.
---------
"So, this is the northern part of Beginning forest, huh." Raven took out his stick from inventory. Suddenly a noisy sound like 'clunk clunk crack' came out from Raven's Nasod Arm.
"What the hell?!"

(1450/2100)
"Wow, I bet that voice came out because, well, your hand is overheated." Kid explained his hypothesis.
"So, maybe you should reduce the use of that mechanical arm?" Kid summoned his scythe.
"Same tactic? of new one?"
_________________
Raven Taker's uncle IRL. Please report to me if he behaves badly.
Beginner Pixel Artist
if you want a specific Pixel art for your weapon or your skill, don't hesitate to ask me!

(0/0)
"Fine." Raven started running toward the nearest wolf pack and yelled. "SAME TACTIC! <Burning Burster>!"
3 fireballs came out and attacked all pack members. They charged toward Raven.
"Here we go!" Raven punched 1 wolf in the face and knocked it back, while another wolf jumped and bit his left shoulder. "ARGH!" He hit the last wolf with his stick twice with the second fox still on his shoulder.

(1450/2100)
"<Lightning Bolt>!" Kid shot 1 double-power Lightning bolt toward the one that bit Raven's shoulder and created a lightning wave from his scythe, hit the other wolves. The two changed target to Kid and started charging toward him.
"Despite my class, I'm not limited to magic only!" Kid swung his scythe, stabbed one wolf and threw it away. Using the dull edge of his scythe, Kid hit the other wolf and threw it away too.
_________________
Raven Taker's uncle IRL. Please report to me if he behaves badly.
Beginner Pixel Artist
if you want a specific Pixel art for your weapon or your skill, don't hesitate to ask me!

(0/0)
"Thanks!" With only 1 wolf Raven have faith that he won't fail. He uppercut the wolf and successfully dealt huge damage from it. He approached the wolf, grabbed its mouth and threw it upward, and while it's in mid-air he swung his stick to its belly and threw it again.
"Now this is the last attack!" He stomped the fainted wolf and killed it.
40 Gold
40 EXP
40 Pet EXP
1 Wolf fur

"Nice one!" As both wolves stood up Kid swung his scythe again to create a lightning wave. it hit only 1 wolf which got thrown to Raven, while the other dodged it and bit Kid.
"Awgh! stoohped wolf!"
_________________
Raven Taker's uncle IRL. Please report to me if he behaves badly.
Beginner Pixel Artist
if you want a specific Pixel art for your weapon or your skill, don't hesitate to ask me!

(0/0)
Raven punched the wolf with his Nasod Arm as it flew toward him. The Wolf fell to the ground far from Raven. "ugh." He touched his Nasod Arm and it was so hot. "I think I still able to use my skill... <Burning Burster>!" He shoot 2 powerful fireballs and hit the wolf that fell far from him and the other one which bit Kid's arm. Surprisingly both died.
90 Gold
90 EXP
90 Pet EXP
2x Wolf fur

(0/0)
Raven touched his Nasod Arm and it was surprisingly hot. "I will find out how to stop the heat."
Raven opened his menu and quit the party. "Thanks for your help." Raven started his walk back to the town.

Raven walked to the leatherworker and entered the store. "I got your furs."
"Oh nice, thank you! thank you! here is your reward!"
100 Gold
150 EXP
Level up!

"Oh nice..." Raven walked out and leaned toward the leatherworker's shop, panting in his loneliness.
"This arm better get cool fast."

(0/0)
Andrew logged in, remembering that today's the boss fight for the second floor. He was quite excited. He wanted to get a gun finally for himself, and wanted to kill more mobs and stuff. He materialized at the town, looking around the warm place. He noticed that Kid was online. "Hey dude, ready for the fight?" Andrew sent a PM to him, waiting for a response.

(1450/2100)
Kid went to town vendor's place. "Excuse me!!"
"Hey, what do you need?" Miller asked friendly.
"The party is gathering up on the tower soon. I need 2 potions and 1 scroll, please!"
"200 gold should be no problem for an advanced player like you!"
as soon as the transaction finished, Kid rushed toward the tower. "please don't start yet!!"
"Suddenly he received a PM from Andrew. He replied, "yeah, I'm heading to the tower. Let's meet there!"
_________________
Raven Taker's uncle IRL. Please report to me if he behaves badly.
Beginner Pixel Artist
if you want a specific Pixel art for your weapon or your skill, don't hesitate to ask me! 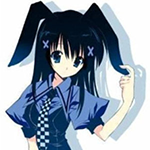 (0/0)
Danth, being the crazy person she was, logged in after something irritating in real life. She memorized the date for the bossfight, so she wouldn't miss it. Who would want to miss such an event? Fighting a huge minotaur with her trusty friend Hex? No one, that's right! She spawned in the town, the place she had logged off. She looked around to see a person named Andrew standing in the town. He was level five, so Danth figured he was also going for the boss. "Hey, hey, person!" She yelled, as Hex waved at the person, mimicing Danth's actions. "Yes, you," Danth said as Andrew pointed at himself. "Are you going for the bossfight too? Mind showing me the way?" She asked nicely as she approached the black haired guy with a bow in his arms.
_________________
"Oh boy, action!" - Hex, The Hellspawn Imp.

(0/0)
"Uhh... Yeah, I guess. This way." Andrew said as he went towards the gate with a black haired girl following her. There seemed to be a strange figure on her shoulder. It was what seemed like an imp. It was red, burning, and munching her hair. "Hey, might I ask who or what is that on your shoulder?" Andrew asked pointing at the Imp.

(0/500)
Velk reappeared in the town of beginnings. The party for the boss fight was getting ready, he knew. He saw kid was online, and sent him a message. "[i]I'm going to the tower. See you there![i]" He turned towards the town gates, and flew towards the <Minotaur Tower>.
On the way, he teleported behind many players to move quickly.
_________________
"I'm looking at my chips bag that's flying away majestically"

(0/0)
"Oh, me? I'm Hex, a Hellspawn Imp!" Hex said, happily looking at Andrew. It was almost as he wanted to eat him up alive and spit his bones out to form his skeleton dancing Lambada. That was the first thought that came to his mind, yes, but he'd rather not eat people. Diet does that to a person.
---
They were walking through the forest, and the tower was right after the forest. Danth and Andrew spent most of the time just staying quiet, since they were too different to actually talk about anything except the game, really. They shared information about their skills and stats, items, but nothing of importance..

(0/0)
Andrew saw Danth sit down, but he insisted "Hey, Danth, why don't we go inside and see what we're up against?" He asked as he opened the doors, and entered the boss tower. The doors were huge, and wooden. As he opened them, he felt like being lifted up quickly, and he found himself in a huge chamber with tall, stained glass windows, reneissance style pillars, made out of marble, sunlight was turned into different colours because of the stained class, and there were golden candle chandeleirs on the ceiling. At the end of the huge room, Andrew saw a huge minotaur sitting. He had huge horns, his fur was brown and the only thing he was wearing was HUGE leather pants and some armor. I wonder who made those items he's wearing Andrew thought looking at him, as he saw Danth follow him. "Nice view, huh?" He said, as he sent a party invite to Danth, Velk and Kid. It was easy to invite Danth, but Kid and Velk he had to invite through the friends list.

(0/500)
As Velk appeared before <The Tower>, he recieved a party invite from Andrew. He accepted, and quickly said in party chat "So you were here already, Andrew." He entered through the same wooden doors as Andrew had, and ended up next to him.
"So that's the boss?" he said, as he saw the <Minotaur>.
_________________
"I'm looking at my chips bag that's flying away majestically"

(1450/2100)
Kid arrived at the tower and he received a party invitation window. "Andrew's there already?!" Kid pressed the accept button and entered the tower. For a moment he felt like he's on a super fast elevator. soon he arrived at the top of the tower, or that's what he felt. He stood beside Andrew and Danthy and Velk. "
Mind waiting for a friend of mine? He'll come soon."
_________________
Raven Taker's uncle IRL. Please report to me if he behaves badly.
Beginner Pixel Artist
if you want a specific Pixel art for your weapon or your skill, don't hesitate to ask me!

Re: Floor One: Town of Beginnings.